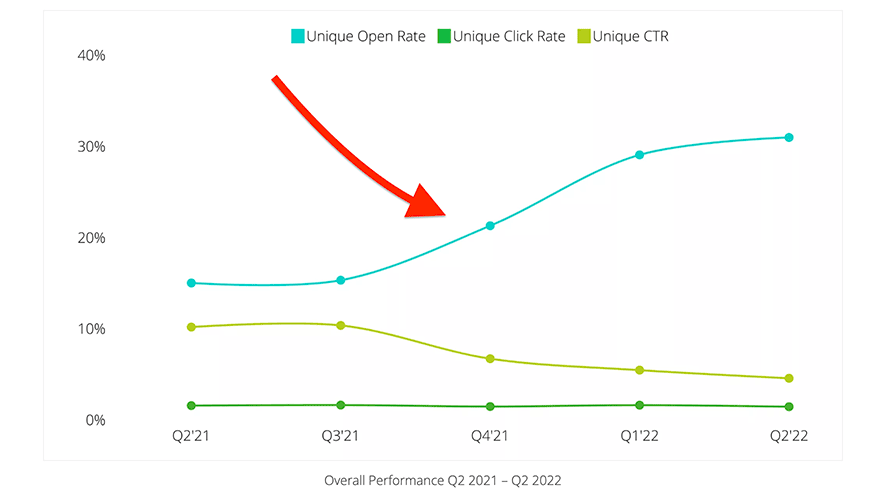 But don’t get excited … this chart doesn’t tell the whole story. Open rates have not gone up.

To their credit, Omeda does say in the intro to the report that “we’re seeing open rates level off, signaling the disruption caused by iOS15 and Apple MPP may be stabilizing”.

But they don’t actually say that Apple’s MPP is what caused the drastic increase in open rates. I wish they would have made that much more clear.

So, when you look at reports like this, know that this is just reported open rate, not actual open rate.

Did you notice the corresponding drop in click through rate (CTR) in the chart as a result? Clicks haven’t changed, so with more false reported opens and the same amount of clicks, CTR will naturally decrease.

Clicks have stayed the same and are what really matter now.

Interestingly, some email senders did the opposite of Omeda. They decided to report Apple emails as NOT opened. This is the safer way to do it, but these providers saw their reported open rates plummet as a result.

They didn’t actually decline, but Apple’s MPP caused it to look like they did.

As a result, I know one email provider who used to report Apple emails as unopened. But they just switched to report them as opened so that their reported open rates didn’t look bad compared to other email senders.

Bottom line, if you’ve seen significant changes in your email open rates – up or down – they likely haven’t actually changed at all. You’re just seeing the impact of Apple’s MPP.

Open rates are pretty useless now. It’s time to stop looking at them as a core email metric and look at clicks / click rate instead.